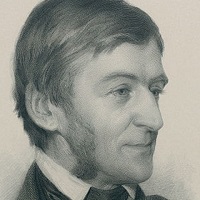 A friend is a person with whom I may be sincere. Before him, I may think aloud. I am arrived at last in the presence of a man so real and equal that I may drop even those undermost garments of dissimulation, courtesy, and second thought, which men never put off, and may deal with him with the simplicity and wholeness, with which one chemical atom meets another. Sincerity is the luxury allowed, but diadems and authority, only to the highest rank, that being permitted to speak truth as having none above it to court or conform unto. Every man alone is sincere. At the entrance of a second person, hypocrisy begins. We parry and fend the approach of our fellow-man by compliments, by gossip, by amusements, by affairs. We cover up our thought from him under a hundred folds.
I knew a man who, under a certain religious frenzy, cast off this drapery, and omitting all compliments and commonplace, spoke to the conscience of every person he encountered, and that with great insight and beauty. At first he was resisted, and all men agreed he was mad. But persisting, as indeed he could not help doing, for some time in this course, he attained to the advantage of bringing every man of his acquaintance into true relations with him. No man would think of speaking falsely with him, or of putting him off with any chat of markets or reading-rooms. But every man was constrained by so much sincerity to the like plain dealing and what love of nature, what poetry, what symbol of truth he had, he did certainly show him. But to most of us society shows not its face and eye, but its side and its back. To stand in true relations with men in a false age, is worth a fit of insanity, is it not?