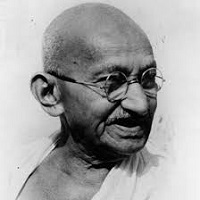 The Future is with Woman

Ganhdi, in 'To the Women of India'