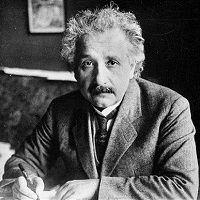 Happy as a Pig

(Written in old age) I have never belonged wholeheartedly to a country, a state, nor to a circle of friends, nor even to my own family. When I was still a rather precocious young man, I already realized most vividly the futility of the hopes and aspirations that most men pursue throughout their lives. Well-being and happiness never appeared to me as an absolute aim. I am even inclined to compare such moral aims to the ambitions of a pig.

Albert Einstein, in 'Quoted in C.P. Snow, Variety of Men'